You are here: Home / Harold Gillies The Father of Plastic Surgery 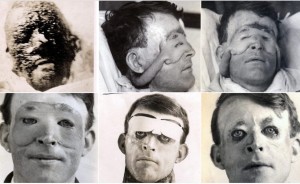 This May it will have been 100 years since Walter Yeo was wounded during World War 1. Yao was in the Royal Navy and he was injured at the Battle of Jutland in May 1916. Walter sustained horrific facial damage, including losing his upper and lower eyelids.  Due to the horrific facial trauma suffered by so many soldiers in the trenches of the First World War, doctors began trying out new surgery methods to treat these men. Walter Yeo was fortunate to be treated by a surgeon by the name of Harold Gillies. Today Harold Gillies is known as the father of Plastic Surgery.

Gillies was desperate to help the countless men coming out of the trenches with disfiguring injuries. He had been pioneering skin grafting techniques when Walter Yeo was sent to him. He used these new techniques to build Yeo new eyelids. The technique he used is called the tubed pedicle flap.  Over the course of the war, Harold Gillies would go on to perform over 11,000 surgeries on over 5000 soldiers who had their faces disfigured by gun shot and shrapnel wounds. In 1930, Harold Gillies became Sir Harold Gillies when was knighted by the King of England.